The COVID-19 outbreak has shaken the health and the wealth of every nation on earth, and the Middle East is no exception. The pandemic is spreading like wildfire in terms of the number of infected, economic losses and death tolls.

Two month after the first case of infection was made public in the region, the number of confirmed cases, in the area stretching from Iran to Mauritania and Turkey to Somalia has reached 190,882, and the total death count has reached 7,469 according to data collected by worldometers. These figures represent 9.1% and 5.5% of the world total of each category. The death rate in the region is 3.91%, well below the world rate of 6.47%.

The first case in the region was recorded in Egypt on February 14 when symptoms of infection appeared on a tourist boarding a cruise ship travelling from Aswan to Luxor. Five days later, Iran recorded its first confirmed case in the City of Qom. It was then when the outbreak started to spread to the neighbouring countries in the Arab Gulf area. The first case in North Africa was recorded in Algeria on February 17, followed by cases in both Morocco and Tunisia on March 2. More than a week later, Turkey recorded its first case on March 11. The latest countries to declare confirmed cases of COVID-19 were Libya, Sudan and Yemen. The only case that was announced in Yemen is still controversial, as the family of the person said to have been infected denies the claim.

Governments in the region found it hard in the beginning to admit the spread of the virus and regarded the admission as a liability, so they generally tried to cover up until they came under pressure to declare it. Even then, figures of infected cases and death were manipulated and authorities underestimated the threat of the virus. The general public also played down the danger of the virus by hiding and denying symptoms, fearing the consequences of life in isolation or undignified death in case it is known to be by the virus. In some parts of Egypt for example, villagers formed human chains in order to prevent the burial of coronavirus victims in the village’s burial place. One of these incidents involved the burial of a female doctor who was infected and died while working in hospital treating COVID-19 patients. Many observers believe that the published figures of COVID-19 throughout the region are very much below the real count. The main message by governments to the public until now is, don’t worry too much, the deadly virus is under control.

It is clear from the flow of the news that governments want to avoid any kind of internal pressure or exposure to any kind of International criticism because of the way they are handling coronavirus outbreak.

Egypt claimed that it was a foreign tourist from Taiwan who brought COVID-19 into the country. Saudi Arabia blamed Iran for allowing Saudi visitors to enter and exit the country without stamping their passports, which made it very difficult to keep track of them visiting Iran, while in North Africa, it was expatriates coming back from Italy, France and other European countries who were held responsible.

When the denial policy failed and all governments of the region had to admit increasing cases of infection and death, the blame game took another aim in order to avoid responsibility. The very obvious pattern of regional behaviour was the imposition of national measures to close borders, stop flights and send foreign workers back to their countries, including those from brotherly Arab and Muslim countries. Kuwait and the UAE pioneered this policy of the expulsion of foreign workers as thousands of them were kept in closed camps while contacts were made with their countries of origin to arrange for their repatriation.

Very little was done with respect to increasing the capacity and efficiency of the healthcare sector in the region. Most of the funds allocated for stimulus programs, about 90%, went to helping stock markets, banks and big businesses, and the rest was divided between all other sectors including healthcare. Moreover, no country in the region has declared a clear, comprehensive healthcare strategy to deal with the deadly virus. Apart from general statements designed for local consumption very little or nothing at all was done to provide appropriate testing capacity, diagnostic means, increasing hospital beds and making well-equipped intensive care units available when needed.

The most effective tool employed by governments was the lockdown measures that aimed at reducing the spread of the virus. Social distancing measures were completely absent, especially in public transportations and markets. By the Third week of March almost every country in the region was under total or partial lockdown, mostly in the form of partial curfew at night while life mostly continued as usual during the day. Decisions of imposing lockdown measures were taken without any scientific or healthcare guidance. Only in the last few days Morocco made it compulsory to wear face masks and Egypt began providing commuters in Cairo with free ones for their journeys by metro. Saudi Arabia declared the suspension of the Umrah and perhaps the same will apply to the Hajj this year. Yet, it is very much unclear how and when these countries will proceed from the lockdown to normal life, as no country has a clear exit strategy guided by science and health expertise.

COVID-19 is having its severe economic impact on the region, especially where the exposure to international markets is high. In resource-based economies the impact is huge, cutting down governments and private sector economic activities and destroying jobs. In some countries like Saudi Arabia, Kuwait and the UAE, companies owned by the state and private sector employers have made tens of thousands of members of their workforce redundant and ended their contracts. In doing so, those who were made redundant became illegal residents, which means that by staying they risk being arrested and sent to prison. Indians, Pakistanis, Egyptians and other foreign nationals who have their families with them are the ones who suffer the most. They have families to feed but have no money to buy food. This is a very bad situation for those who were lending hands to support the economies of the host countries.

In Qatar, foreign workers who were confined to one area in Doha are until now looked after by the government. They are not allowed to go out but receive necessary food and supplies through governmental and private agencies. The departure of tens of thousands of foreign workers from the Gulf may put the much needed recovery later on in jeopardy, as companies will have to start a lengthy process of recruiting from abroad.

In some countries or economic sectors where they are less exposed to international markets, the economy is almost untouched. For example, the agricultural sector in Egypt is still working well. But the country is exposed to an economic hit as a result of the decline of revenues from activities such as gas exports, tourism, the Suez canal and foreign investment, not to mention the negative impact of thousands of workers returning from the Gulf. In countries torn up by war such as Syria, Libya and Yemen, the impact of the COVID-19 outbreak is adding more agony to the suffering of the people.

However, as the state still plays the most important role in running the economy in most of the region, the slump of oil prices, decline of international trade and tourism which are expected to cause global economic contraction will impact the economy of the region as a whole.

According to the latest estimates released by the IMF, economies of the Middle East and Central Asia will contract by 2.8% by the end of this year, but will grow in 2021 by 4%. Looking at market realities, such estimates reflect a very optimistic scenario that is based on a strong recovery in the second half of 2020. If the economy failed to bounce back strongly from contraction to recovery during the second half of the year, the expected recovery would be slow and modest. Most of the monetary and financial stimulus packages are designed to save banks and big companies and help businesses keep afloat. In most of the region the situation will depend on the recovery of the oil market. Despite the latest agreement on production cuts, the market seems less convinced, and we may see prices hovering around $30 per barrel for most of the second half of 2020. If that were the case, the Saudi economy may contract by up to 15%, five times the IMF estimate. It is also clear that other sectors are taking bad hits: tourism, exports and foreign investment in the region have already witnessed a huge downturn.

Coordination between the countries within the region regarding the containment of coronavirus is almost nil. The Red Crescent is almost absent and the Organization of Islamic Conference has had no voice in the crisis. With the exception of Israel, no country in the region is playing, or even trying to play an active role in the global search for vaccine or treatment to protect or to cure people from infection. As nationalism was the main policy to guard against the spread of the virus, policies to guard against economic downturn and prepare for economic recovery are following the same route. This applies to the whole world as well as to the Middle East. We can easily see that although Saudi Arabia, who chairs the G20 this year, has been busy calling for and holding many virtual meetings on energy, finance and health for leaders and ministers of the group. That was not the case regionally. Saudi Arabia and others paid no attention to calling for parallel meetings for GCC or the League of Arab States on urgent matters relating to COVID-19. We can conclude that  the threat of the virus failed to fuel regional cooperation. On the contrary, it pushed short sighted national policies to the front. Ironically, Israel was the one state in the region that initiated cooperation on COVID-19 with Jordan and Palestine! Medical staff from the West Bank and Gaza Strip crossed over the green line to have training in Israel and Israeli medical equipment was sent to Palestine along with other medical assistance by the UN and the EU. One can can also conclude that the virus threat has brought the Israeli- Palestinian conflict to its lowest point in decades.

Egyptian writer and economist. Currently writes for al- Quds al- Arabi newspaper in London. He Studied economics and political science. He developed exciting careers in media, business administration, government and in diplomacy. His work experiences include working for the UN (senior political affairs officer 2003- 2006), the Egyptian Ministry of Trade and Industry (Advisor to the Minister 2012- 2013). His publications include numerous newspapers articles, dozens of academic research papers, and many books. His latest publications include: “Reproduction of Failure, a Study of Egypt’s Economic Policies in a Turbulent World”, 2019 (in Arabic) and “Manifesto for Social Justice…” 2015, (in Arabic).

Unipolar globalization is coming to its end 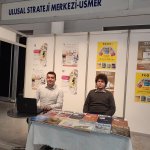